All testimonials were prepared by our clients in their own words. 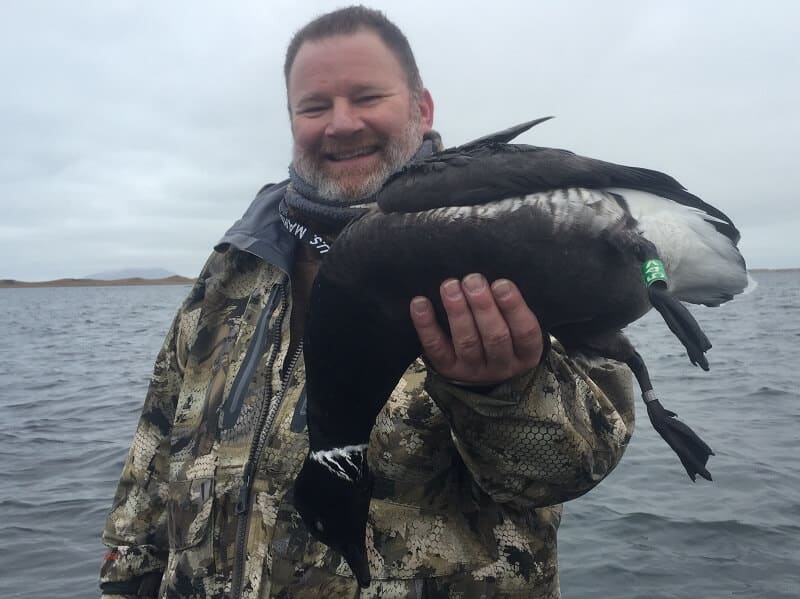 “You absolutely cannot go wrong with choosing Four Flyways Outfitters as your host and guide in Cold Bay, Alaska. Capt. Jeff offers waterfowl hunts from Sept. until the end of the season around mid-December. We chose the late season hunt to target Common Pacific Eider and Black Brant.

Jeff has spent the bulk of his adult life around Cold Bay, Izembek and the YKD as a waterfowl research biologist. He has spent years scouting and hunting specific areas to ensure you a quality hunt. Not only is Jeff a knowledgeable guide, but his operation is run by the “safety first” mantra and the highest in hunting ethics. You will enjoy a lodge built for the waterfowler with the amenities needed for your trip along with world-class, home cooked meals that include grilled Black Brant which rival any ribeye you’ll ever eat.  Just a very enjoyable, world-class experience for the traveling waterfowler or collector.”

“I hunted with Jeff Wasley the last week of November 2016; I was hoping to harvest a few Pacific Eiders for my taxidermy collection. I was able to not only harvest one but I actually got my yearly limit of 4, and along with the Pacific Eiders I also harvested Harlequins and Oldsquaws.

Jeff operates a first class operation out of Cold Bay, Alaska. The lodge is very well laid out, it has an area to leave hunting clothes and waders, and has comfortable bedrooms. If you’re looking for a destination where you can harvest Pacific Brant, Scoters, Pacific Eiders, Harlequins, Eurasian Teal, and Oldsquaws, I highly recommend a hunt with Jeff.” 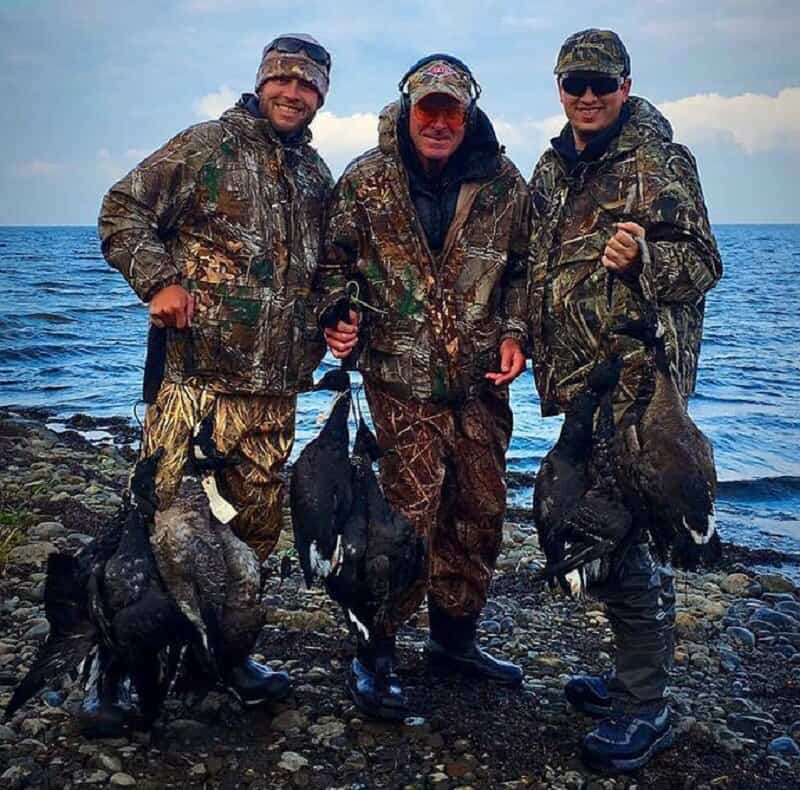 “Duck hunting is complicated on Cold Bay. The tides are big and include fast changing weather and decreasing daylight time. Jeff Wasley and his guides consistently produce well-organized and productive hunts in spite of the challenges.”

“I have hunted with Four Flyways Outfitters at Cold Bay on three different occasions. What a spectacular variety for the waterfowler…where else can one hunt puddle ducks, divers, sea ducks, Pacific black brant and two subspecies of Canada greese, all in one trip? Given the right timing, there is also freshwater fishing for salmon and saltwater fishing for halibut! All of this adventure takes place amid spellbinding scenery and a fascinating array of wildlife, including brown bears, red foxes, sea otters, bald eagles and many others. I have been many places in search of the world’s best wingshooting, and can honestly say that Cold Bay is at the very top of my list.” 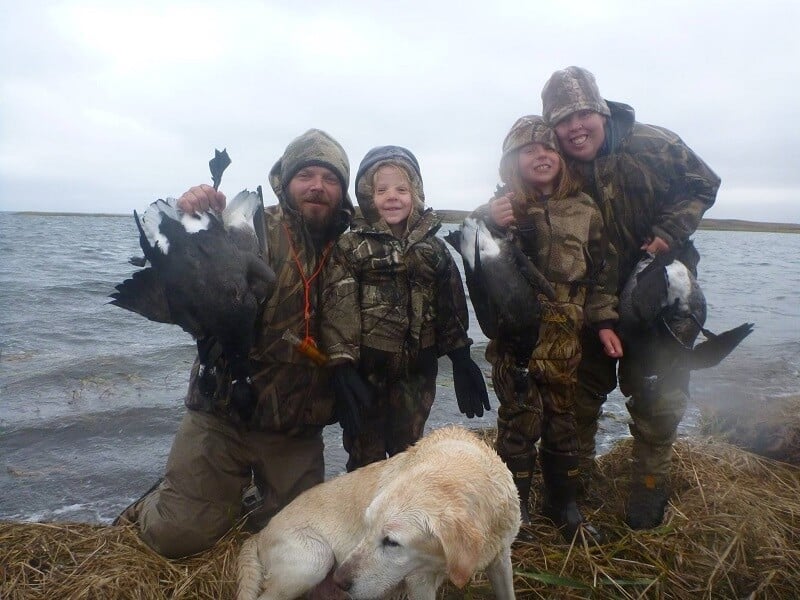 “My entire family came up to see the legendary Izembek Lagoon and the world’s population of Pacific brant. I had been 3 times before, and one of my daughters had come on one of those trips before, when she was five years old. This last time, the whole family came, including my wife, our oldest daughter who was now 8, and our other daughter who was 6. My wife and oldest daughter shot their first brant on this trip. Jeff is a great guy, fully knowledgeable about the birds and the hunting conditions. I could describe other hunts with Jeff as “tough guy” hunts, specifically when hunting Pacific or King eiders, which is needed for such hard to get species. However, on the 2 occasions where very young kids or family tagged along, they were relaxing hunts in which all could enjoy by chasing brant, cacklers, seaducks, and ptarmigan. The family is already asking to come again and we might even bring my Dad up for his 70th birthday. The accommodations and food make for a great time for when you aren’t in the field. I can’t wait to come up and spend time with Jeff again!” 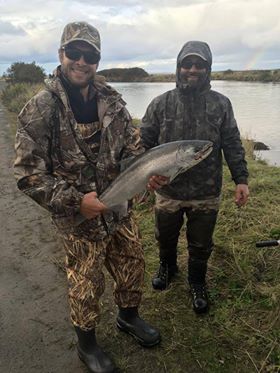 “Jeff Wasley is an extremely talented and experienced duck hunting and goose hunting guide him In Cold Bay Alaska. Our experience with him was top notch, from the food that we were provided and sleeping accommodations to the transport to the hunting sites. Jeff is looking to maximize the amount of time you either get to fish or hunt while you are staying with him. Every hunt we went on was incredible both in scenery and quality of the hunt. Jeff is extremely professional and the guides that help him are both kind people and extremely talented themselves. I highly recommend him for anyone looking for a unique Alaska experience with some world-class hunting and fishing in Cold Bay, Alaska.” 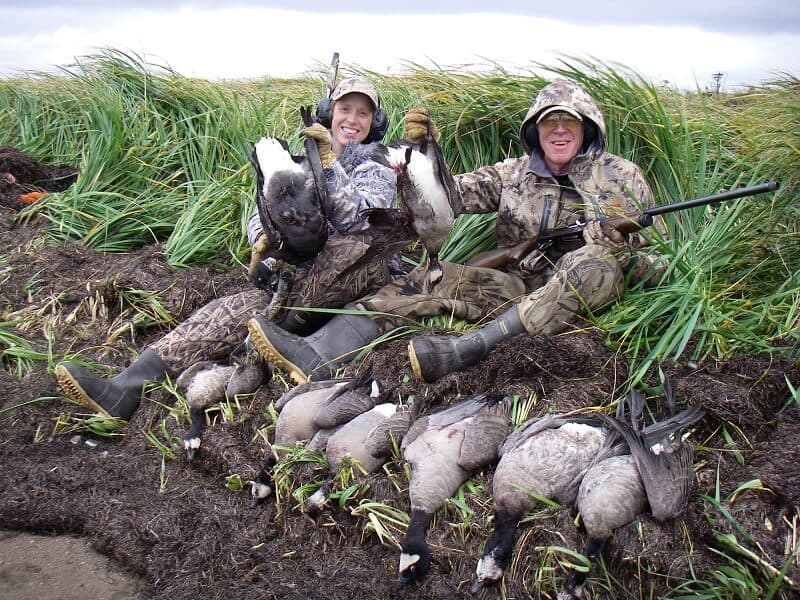 “In late Sept 2016, my daughter and I hunted with Jeff Wasley at Izembek Lagoon near Cold Bay, Alaska. We are experienced waterfowlers and in every respect hunting with Jeff was an amazing adventure!

Jeff is a retired wildlife biologist. His extensive knowledge about all waterfowl species and hunting techniques for Izembek made our trip much more enjoyable than a hunt in which success is judged by only the number of birds you can kill.  Jeff showed us a remarkable variety of strategies to bag waterfowl, including hunting the tundra for cackling geese, shore decoy sets for black brant, duck hunting on refuge ponds, and even lay-out boat gunning. He is the only outfitter permitted to guide in the 315,000 acre Izembek Wildlife Refuge.  Jeff’s ability in open water transits validates his rating as a Captain by the U.S. Coast Guard.

This was the highest quality hunt we have ever experienced. We plan to return annually to hunt with Jeff in this unique wilderness setting.” 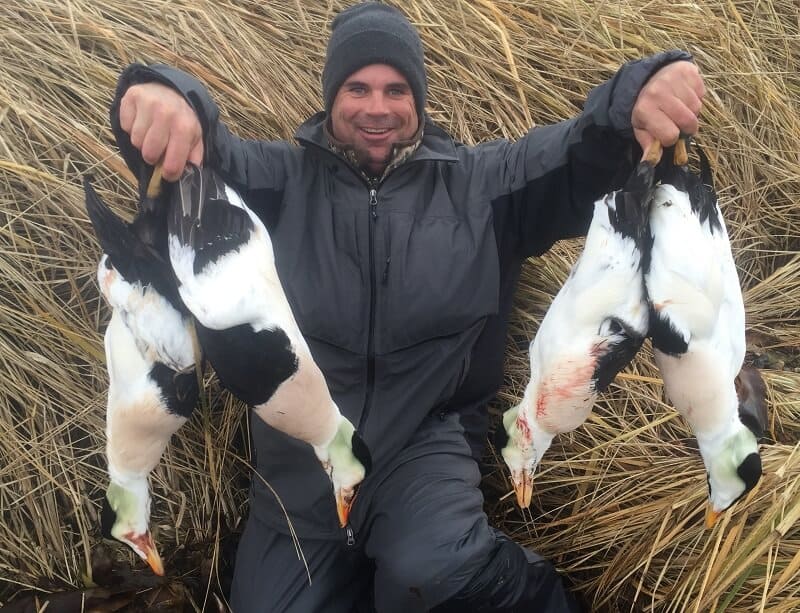 “I’ve had the pleasure of hunting with Jeff Wasley 4 times.  Jeff always delivered fun, safe and successful hunts.  Jeff is extremely knowledgeable when it comes to waterfowl.  He works in a challenging environment but his dedication and hard work produces birds for his clients.  My hunting highlights with Jeff are too numerous to list here, but trips for King Eider, Pacific Eider, Eurasian Wigeon, Aleutian Teal, etc. provided some of my best hunting memories.  I consider Jeff a friend and look forward to many more hunts with him in the future.” 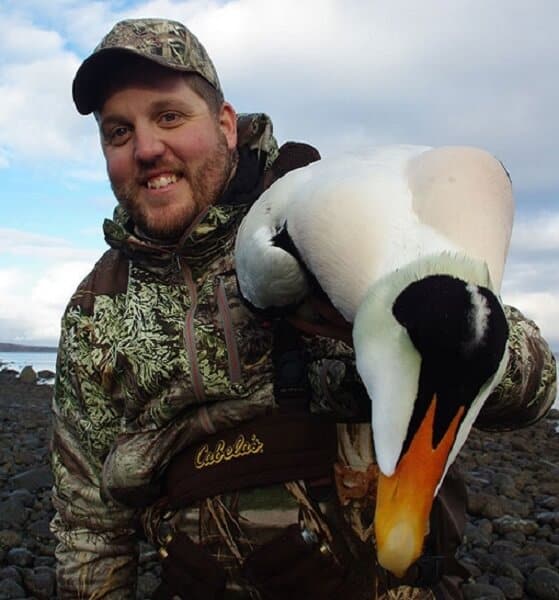 “Cold Bay/Izembek NWR should be on every serious waterfowl hunters bucket list. As an avid waterfowler that has been lucky enough to see a wide variety of birds and locations, I consider one of the top destinations in North America. It is one of those places that you will want to visit again and again. Captain Jeff and his crew are experienced, safe, and most important, passionate about the special resource that they get to share with their clients. A hunt with Four Flyways is truly an adventure of a lifetime! 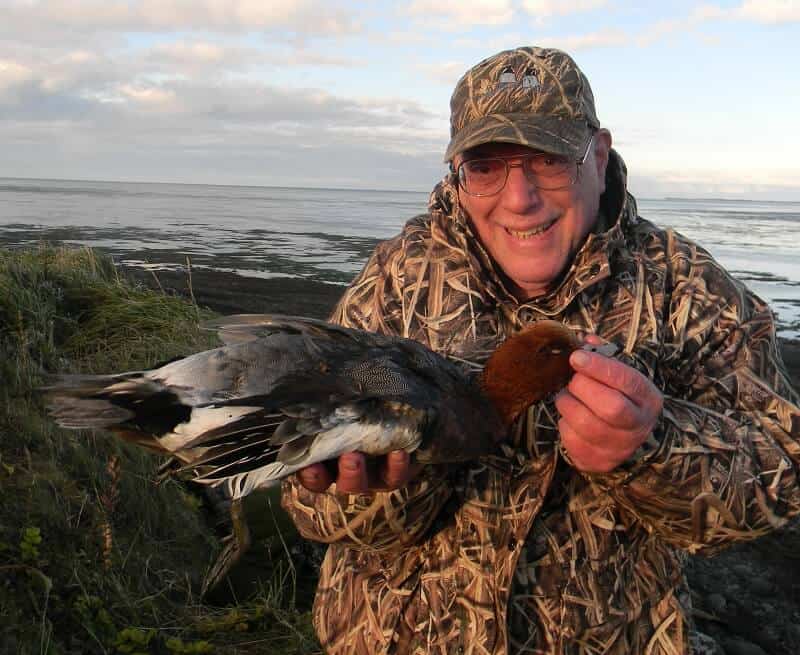 “In 2011 I made out a “Bucket List” of the ten waterfowl hunts I most wanted to accomplish before I have to hang up my waders…I was 71 at the time. I had never shot a Brant, so that made the list. If I got one it would complete my Grand Slam of harvesting all 38 of the huntable North American waterfowl species. I vacillated between going to Baja or Cold Bay. I am more comfortable in Alaska so I hooked up with Jeff at Four Flyways.

When the time came, my Penair flight was two hours late and I didn’t arrive in Cold Bay until 2:00 PM. One of the guides met me at the airport and asked if I wanted to try to get out that afternoon…he said we had time if I hustled. I was game and we met Wasley at the landing at 4:00 PM. He motored us out to a nearby island and by 4:30 I had my Brant. I was elated having just knocked another hunt off my “Bucket List.” How could you beat that? Well, later in the week I did…I shot a drake Eurasian Wigeon!

Izembek is an incredible ecosystem. In addition to seeing a majority of the Pacific Brant population that was staging there, I saw a good proportion of North America’s Emperor Geese and Steller’s Eiders.

I don’t book hunts with outfitters very much, but if they were all like this, I’d do it more often. These guys at Four Flyways do everything in their power to make sure you have a quality experience. If they ever open the season on Emperor Geese again, I’ll be back in a heartbeat.  I hope Jeff has me at the top of the list.” 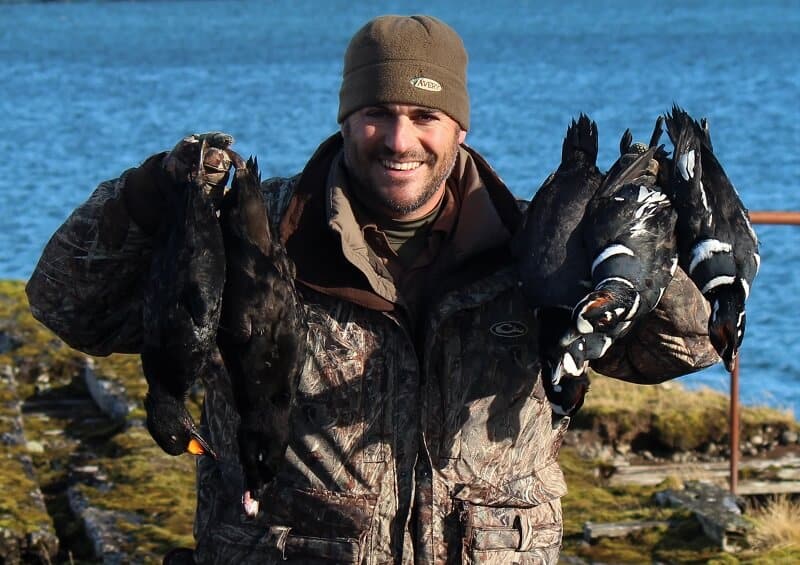 “I have hunted twice in Alaska with Jeff and both hunts produced great experiences and a stunning variety of ducks and geese. Brant, Pacific Eiders, Harlequin, Eurasian GW Teal, Oldsquaw, Scoters to name a few. We also had excellent hunting in the uplands for Ptarmigan. Really enjoyed our time in Alaska and can’t think of any trips that had such a great adventure in a truly wild area. You absolutely cannot go wrong with choosing Four Flyways Outfitters as your host and guide in Cold Bay, Alaska.” 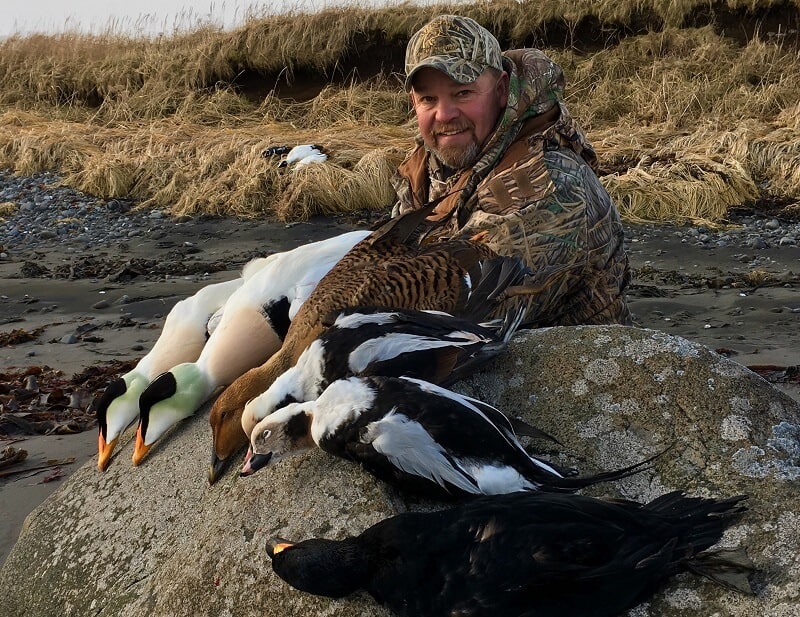 “We hunted late season with Four Flyways Outfitters in Cold Bay, AK 2016. We were able to get some great birds and hunted a wide variety of ducks in everything from open ocean to small ponds. Captain Jeff kept us safe and always had a plan for whatever weather came our way. The lodge facilities and food were top notch and it all added up to a truly great adventure that I highly recommend to any traveling waterfowl hunter.”