The Izembek National Wildlife Refuge offers a unique Cackling Goose hunting experience. We hunt these geese two different ways over decoys. When the weather and tides are right, we will hunt the geese on the tundra as they come to the upland areas looking for berries. Other times, we will set up on shorelines often getting a mixed bag of Brant, Cacklers, and ducks. Our best dates are during September through October, with most of these birds migrating south at the end of October.

The majority of our “Canada” geese are the Taverner’s subspecies (B. h. taverneri) and we also have a smaller number of (B. h. minima) – Cackling Cackling Goose. The most significant recent changes for Canada/Cackling Goose delineation came in the 45th supplement of the AOU checklist (Banks et al., 2004). Scientists called for the split of Canada Goose into two species, the Canada Goose and the Cackling Goose. Both types of geese found in the Izembek National Wildlife Refuge are now considered to be subspecies of the Cackling Goose. Ongoing research may change these classifications but for now we hunt Cackling Geese in Izembek National Wildlife Refuge. 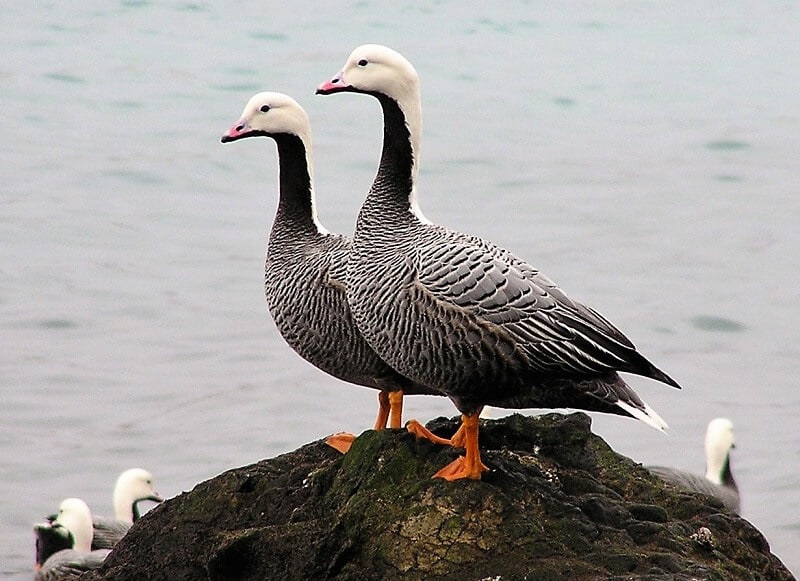 The Cold Bay/Izembek area has an abundance of Emperor Geese present during the entire waterfowl season, September through mid-December. Perhaps the most beautiful of all North American geese, the Emperor Goose spends its whole life in the Bering Sea area.  All hunting has been closed to this species since the mid-1980’s. However, increases in the population have allowed limited hunts to be offered since 2017 for Alaskan residents and since 2018 for non-residents.  Non-residents must apply starting in late November for a following-year permit.  The application must be done on the Alaska Department of Fish and Game website.  Good luck to those that apply! 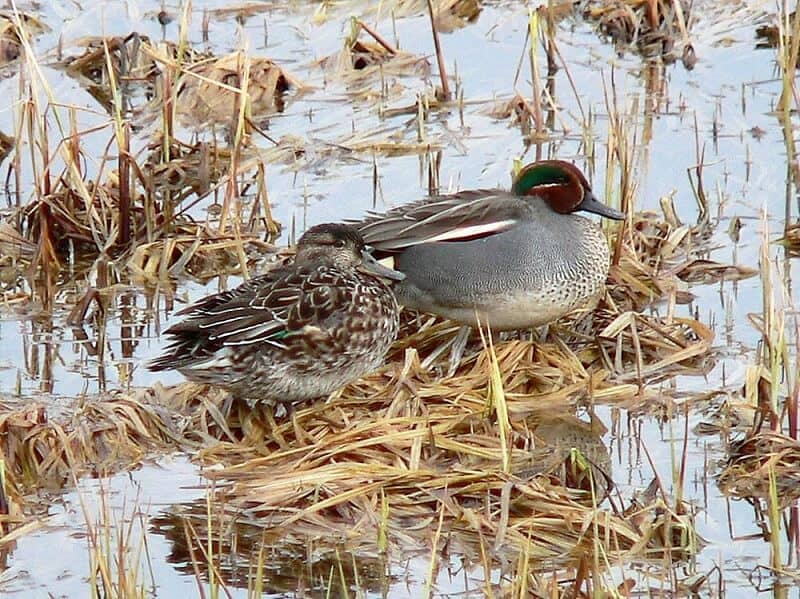 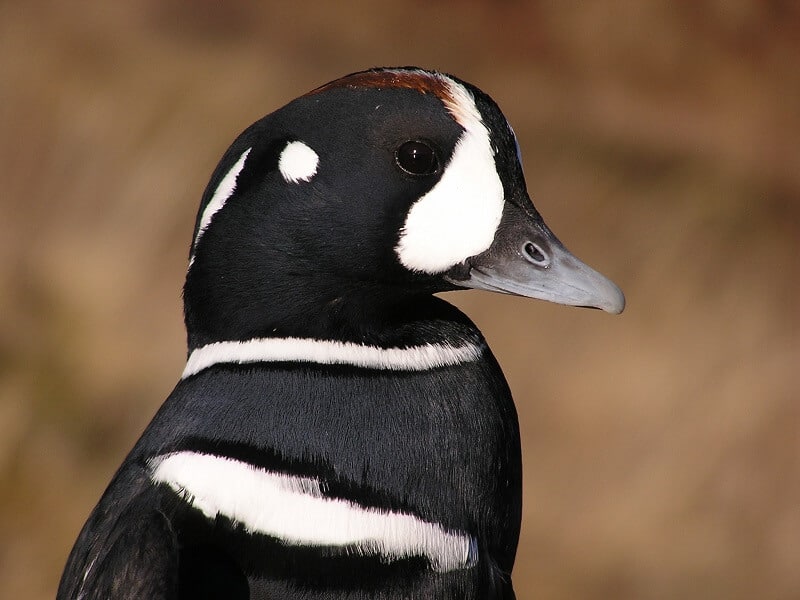 The Harlequin (Histrionicus histrionicus), is a small, boldly-marked sea duck. They are considered one of the most beautifully-plumed of all North American waterfowl. Like other sea ducks, they feed by diving for benthic invertebrates, typically close to rocky shorelines. Insects, crustaceans, and mollusks make up the majority of their diet. Harlequins are very vocal and use a variety of squeaks and peeps. Females first breed when they are at least two years old. Harlequin ducks use clear, fast-flowing rivers and streams during the breeding season, where females will typically lay five to seven eggs.

We are lucky to have a healthy local population of Harlequin in addition to the many migrants that winter in the area. This results in having opportunities to hunt Harlequin in October and the hunting just gets better as more migrants show up. Alaska is the winter home to a great number of Harlequins, especially the Alaska Peninsula and the Aleutian Islands. Harlequin decoy very well and typically congregate near rocky shores. We use custom hand-painted decoys for close shots. Alaska law restricts non-residents to a seasonal limit of four Harlequin. Our hunts for these birds start in early October and go through December 16th. 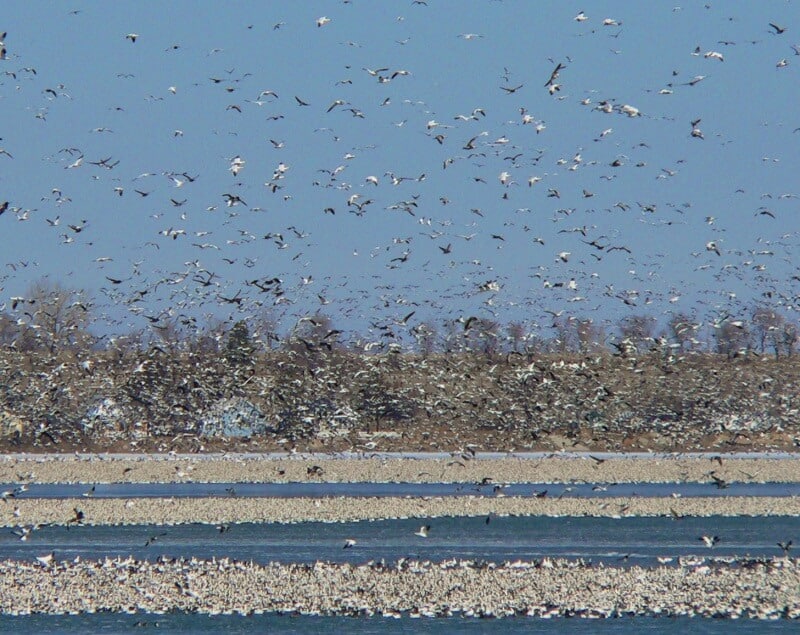 Snow geese consist of two different color phases, white birds known as snows and darker birds known as blue geese. We have hunted South Dakota for spring Snow Geese since 1999 and continue to hunt for them. A Spring Conservation Order started in the late 1990’s to try to lower the midcontinent population of Lesser Snow Geese. This was due to the destructive feeding habits that has destroyed vast amounts of sensitive salt marsh that many species rely on for habitat.

Want to hunt this species?
Check out the South Dakota Hunting Package

One of the most common sea ducks in Alaska, Long-tailed Ducks, aka Oldsquaw, are very plentiful in the area. These fast fliers are very vocal and respond well to decoys. We offer hunts for these and other sea ducks in November and December.
Want to hunt this species?
Check out the Alaska Sea Duck Hunt Package 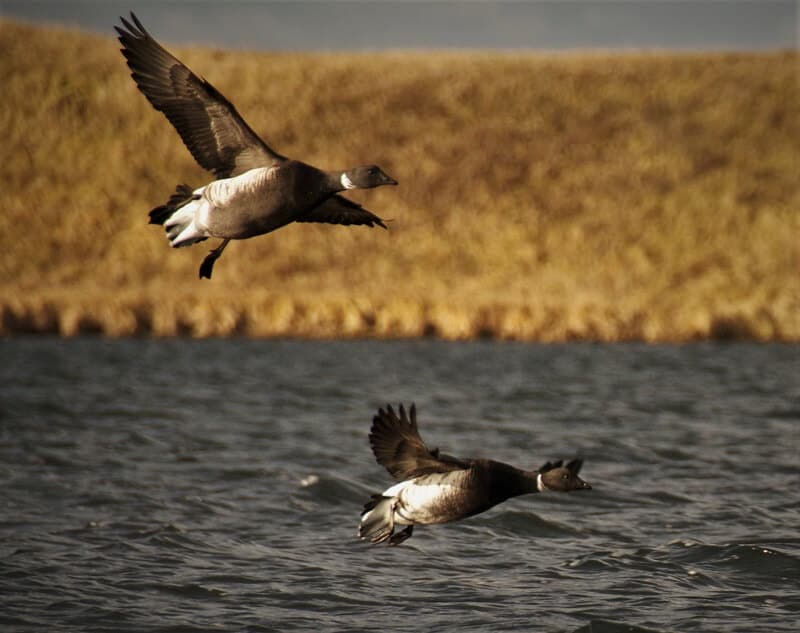 1.) Hunters can witness concentrations that are not found anywhere else, peak numbers range from 150,000-200,000! This translates into consistent hunting for Brant our entire season from September 1st until mid-December.

2.) This is a 100% American hunt, there are no import restrictions, we harvest the birds in a legal and ethical fashion, there are no hidden fees or other unknowns, unlike hunts in foreign countries.  We offer the best Brant hunts in the best place to hunt Brant: Izembek Lagoon. We have the gear and the know-how to provide memorable hunts for this unique sea goose.

3.) Cold Bay offers one of the most diverse combinations of species available in addition to outstanding Brant hunting.  Many Brant hunts in other areas are specifically for Brant, or maybe a couple other species. Our late season Brant hunts also include hunts for Harlequin, Scoters, Oldsquaw, Pacific Eiders, Aleutian Green Wing Teal and more. NO other location offers up the combinations of highly desirable waterfowl species as the Cold Bay area.

4.) In addition to the outstanding hunting for Brant, you will be able to take up to your possession limit (9 birds) home to share with your friends and family. Pacific Brant are simply incredible table fare and we are happy to prepare your birds for the journey home with you. We will also grill some at our lodge, if you like.

Pacific Black Brant (Branta bernicla nigricans) are strikingly marked small sea goose species that mainly breed in the North American Arctic and to a lesser extent the Eurasian Arctic. Many breed on the coastal fringe of the Yukon-Kuskokwim Delta in southwestern Alaska, while others breed in the Alaska and Canadian High Arctic. Eelgrass is vitally important as it accounts for over 95% of their diet. Izembek Lagoon contains some of the largest eelgrass beds in the world and is critical to the Brant life cycle.

Approximately 99% of the entire Pacific Black Brant population stages at Izembek Lagoon in the Izembek National Wildlife Refuge on the Alaska Peninsula during the fall and most in the spring also. Brant begin arriving during August, and numbers build through September. Peak Brant numbers are usually present near late September or early October and usually number between an estimated 150,000-200,000 birds. The Pacific population also includes a small number of the grey-bellied Brant subspecies. The recent mild winters in the Cold Bay area have allowed record numbers of Brant to overwinter in the area. The past five winters have the Cold Bay/Izembek area wintering an average of 40,000-50,000+ Brant. 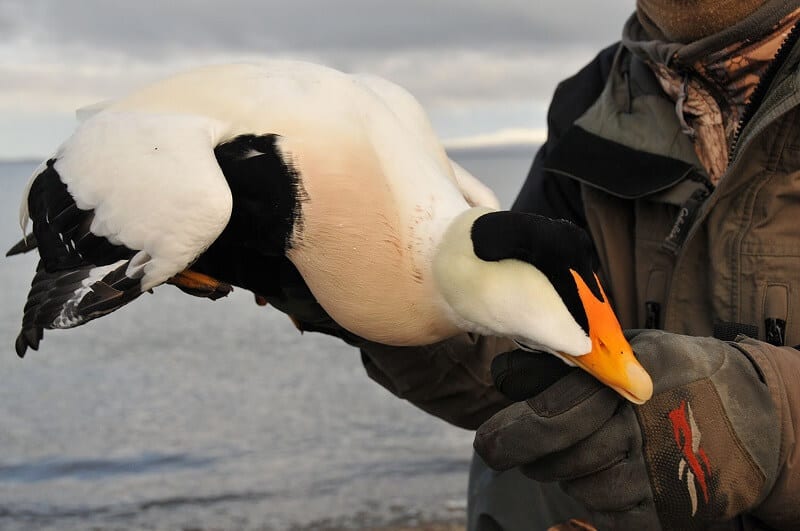 The Pacific Common Eider (somateria mollissima v-nigra) is the most distinct subspecies, morphologically and genetically, of the four subspecies of Common Eider recognized in North America. It breeds primarily along the coastal fringe of Alaska, western Canada, and far eastern Russia. The North American population of this subspecies is estimated to be 170,000, but long-term trends for this subspecies are largely unknown.

Hunting Pacific Eiders is done by very few due to limited access to their fall and winter ranges. They may be the most difficult of all sea ducks to harvest in Alaska. We have located huntable numbers of these exceptional ducks for those seeking our largest duck in North America.

Join us for an unforgettable Alaska duck hunt and be one of the few that get to hunt these amazing ducks. We believe that we offer the best hunts for these birds in Alaska.  Alaska law restricts non-residents to a seasonal limit of four Pacific Eiders. We offer sea duck and Brant combo hunts in November and December for those looking for the best hunt for eiders and more.

Want to hunt this species?
Check out the Alaska Sea Duck Hunt Package 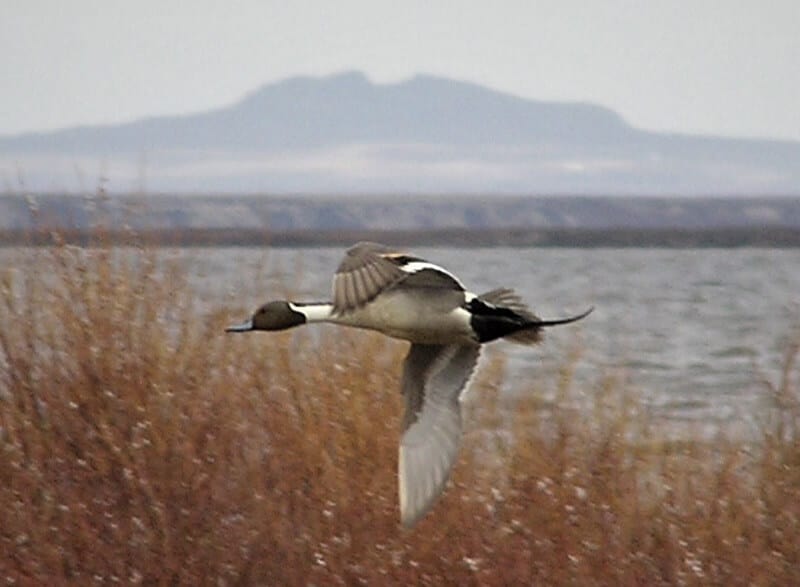 The Northern Pintail are the most numerous puddle duck on the Izembek Lagoon during September and October, and the best hunting for them is typically during early September through mid-October. Pintails often feed on eelgrass seeds and this results in them being among the best-tasting waterfowl anywhere. We often hunt for Brant, Cacklers, and Pintail on the same hunts providing for some action-packed early season hunts. 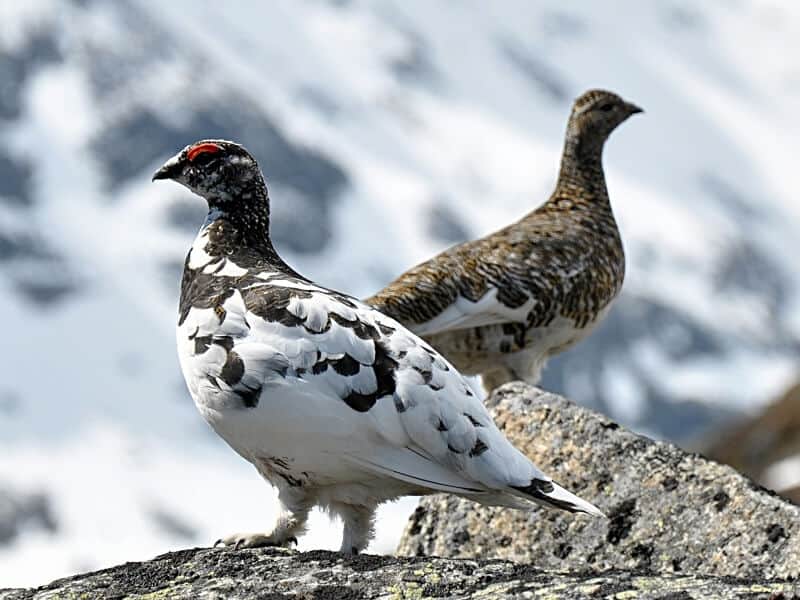 The uplands in Izembek National Wildlife Refuge are home to two types of Ptarmigan. Willow Ptarmigan are far more numerous than the slightly smaller Rock Ptarmigan that prefer higher altitudes. Ptarmigan are a grouse from the north, changing from light brown in the summer to snow white later in the fall. These birds are often found spread out across the tundra in coveys of various sizes. Ptarmigan hunting in Izembek NWR provides a break from our waterfowl hunts and adds variety to the Alaska experience. These are resident birds that are available during the entire season. 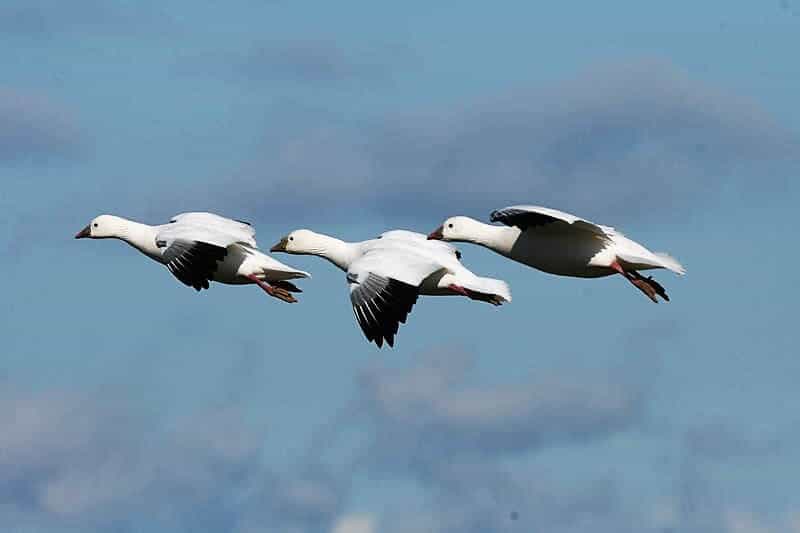 These geese are very similar to Snow Geese, but they are smaller and are typically a white phase goose. However, more blue phase Ross are being shot each year as well as many hybrid Snow/Ross geese. We have good success decoying Ross Geese while hunting the spring conservation season in South Dakota.

Want to hunt this species?
Check out the South Dakota Hunting Package

Both Black Scoters (Common Scoters) and White-winged Scoters are most numerous in the Cold Bay area during our November and December hunts. These large sea ducks feed on various clams, mussels, and other invertebrates by diving to the bottom of the bay. Despite their diet of mainly animal matter these are good-eating ducks when prepared properly.

Want to hunt this species?
Check out the Alaska Sea Duck Hunt Package 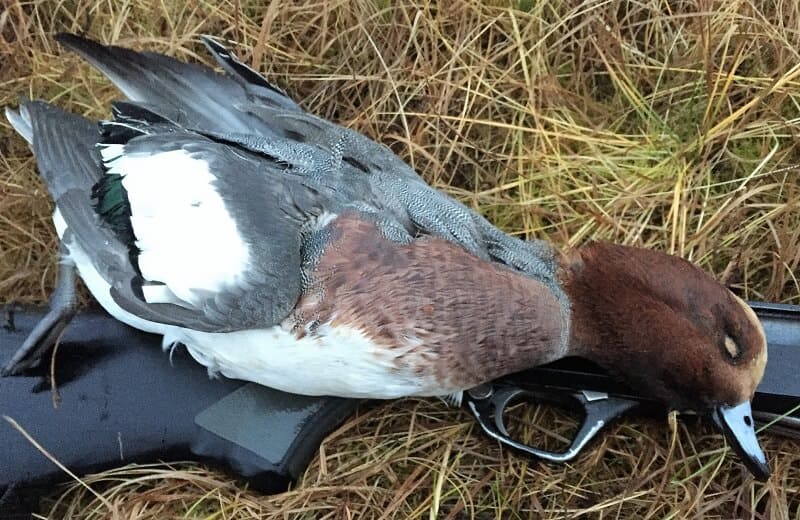 Wigeon are common to our hunting areas, but in much smaller numbers than the much more common Pintail. Wigeon typically feed on eelgrass in wide open areas, often mixed in with large flocks of Brant. Our flocks of Wigeon are mostly American Wigeon, although we often see some Eurasian Wigeon mixed in. Most Wigeon migrate out of the area by early November.